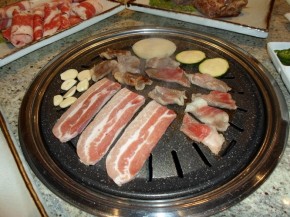 While son, Kenny Lee, is the president of the very successful chain of Lee’s Discount Liquor stores, his father and founder of Lee’s Discount Liquor, Hae Un Lee, was looking for new businesses. Through fate, opened Lee’s Korean B.B.Q., offering Korean cuisine and all-you-can-eat Korean barbecue in a relaxed setting that encourages everyone to have a good time.

It began when Hae Un Lee purchased Korea Town Mall with a Korean restaurant. Originally to be operated by someone else, the deal fell through, but the Lee family still wanted to open an authentic Korean restaurant. They were approached by a woman who had the expertise, along with the desire, to open and manage it. She has been with them since the opening three years ago and the Lee’s Korean B.B.Q. has become very successful with happy customers.

While Korean cuisine is diverse, one of the most popular items, especially in the U.S., is tabletop barbecue. “A few years ago it was all about Chinese food, then Japanese food, but now it is Korean food and we are thrilled,” Kenny Lee stated. The restaurant has become popular with all nationalities.

According to Kenny Lee, while Korea has different regions, the cuisine is same throughout the country. “Rice is the staple with all of the side dishes, along with bowls of soup and one main dish including fish, poultry and beef,” he explained.

There are different cuts of meat used in the barbecue, both with and without marinade. Ribs using a soy-sauce-based marinade blended with garlic and sugar is one of the most popular with diners.

Kimchi, also spelled kimchee, is a traditional fermented Korean side dish made of vegetables with a variety of seasonings. Often described as spicy and salty, there are hundreds of varieties of kimchi made from cabbage, radish, scallion or cucumber as a main ingredient. The seasonings are more pungent since it is combined with sticky white rice. Other side dishes include bean sprouts, dried relish in a spicy sauce, seaweed, fish cake and papaya salad.

Soups are a common part of any Korean meal and served as part of the main course. Sundubu jjigae is made with tofu, vegetables, chili paste or chili powder. The dish is assembled and cooked directly in the serving bowl with an egg placed on top of the soup just before serving and delivered while still bubbling.

The most popular drink is Soju, considered Korea’s most popular alcoholic beverage. It is smooth and clean in taste and pairs well with various Korean dishes. The main ingredient of Soju is rice and is usually consumed with a beer chaser. Koreans will also mix Soju and beer as a drink called somac.

The restaurant is open 24/7, catering to a large clientele of casino employees whose shift ends either at midnight or 4 a.m. Korean-style breakfast is served, which is soup and rice with side dishes.